We made a last minute decision to paint the upstairs back verandah railings over the long weekend. Even though we LOVED the front ones after they were painted we couldn't get started again. And now the roof had beautiful white paint! 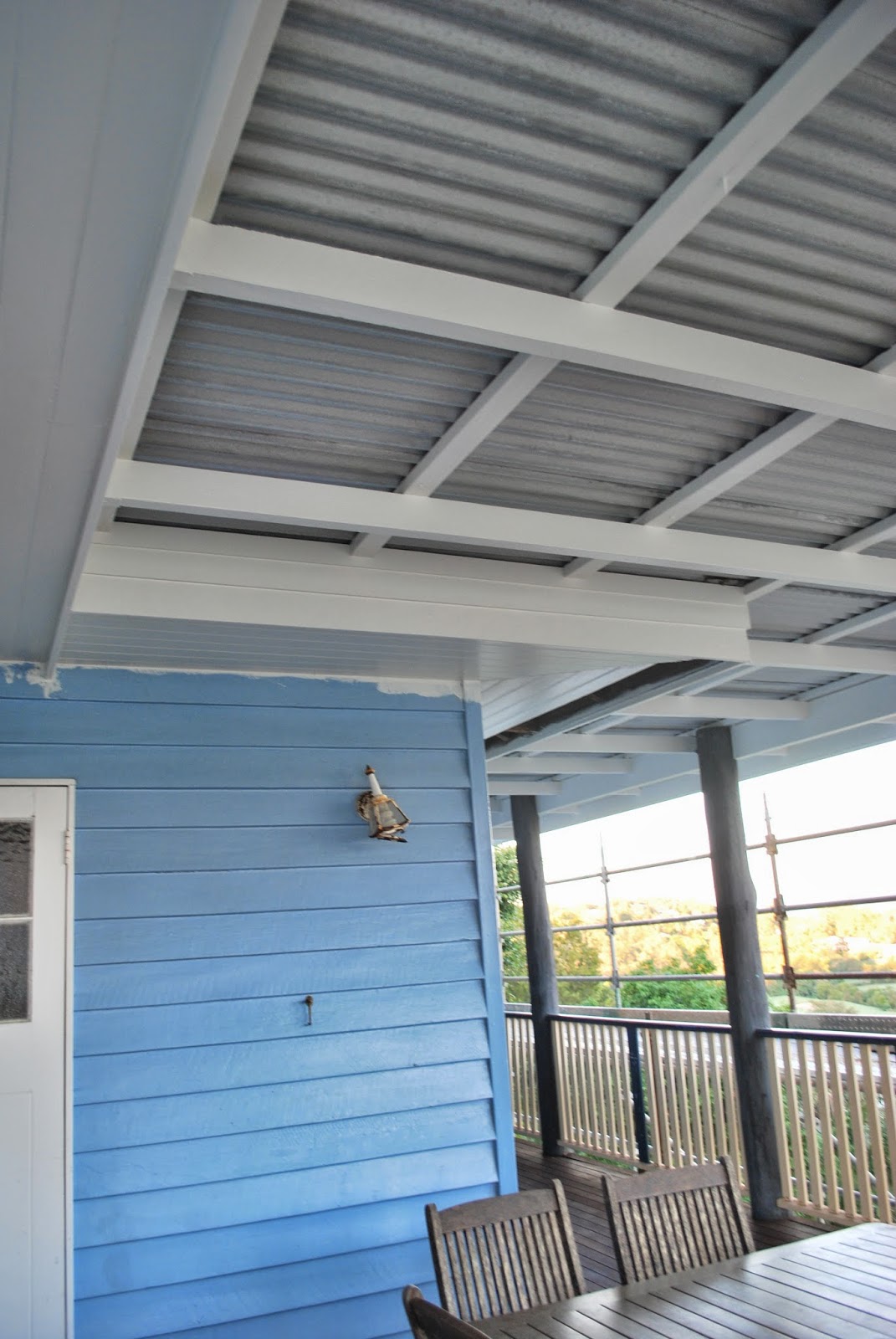 There were 2 major problems, apart from needing to bring ourselves to face painting railings again-they are time consuming and fiddly!
1) The height-it's almost 3 stories up, which made it difficult to paint the far side
2) The railings weren't painted the right way the first time, meaning they weren't properly sealed. Which meant that water had made it in rusting out screws and nails. And potentially rotten wood. 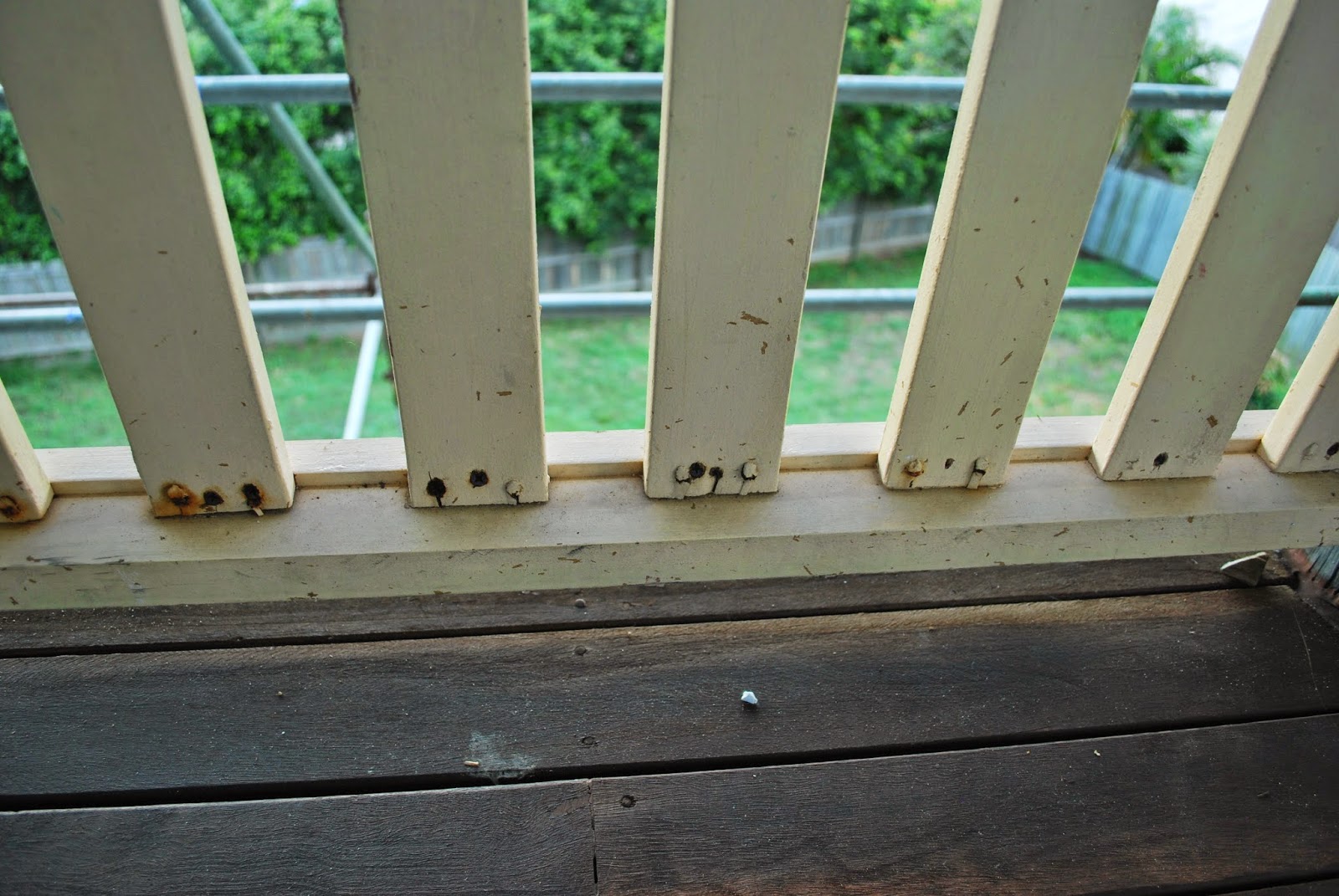 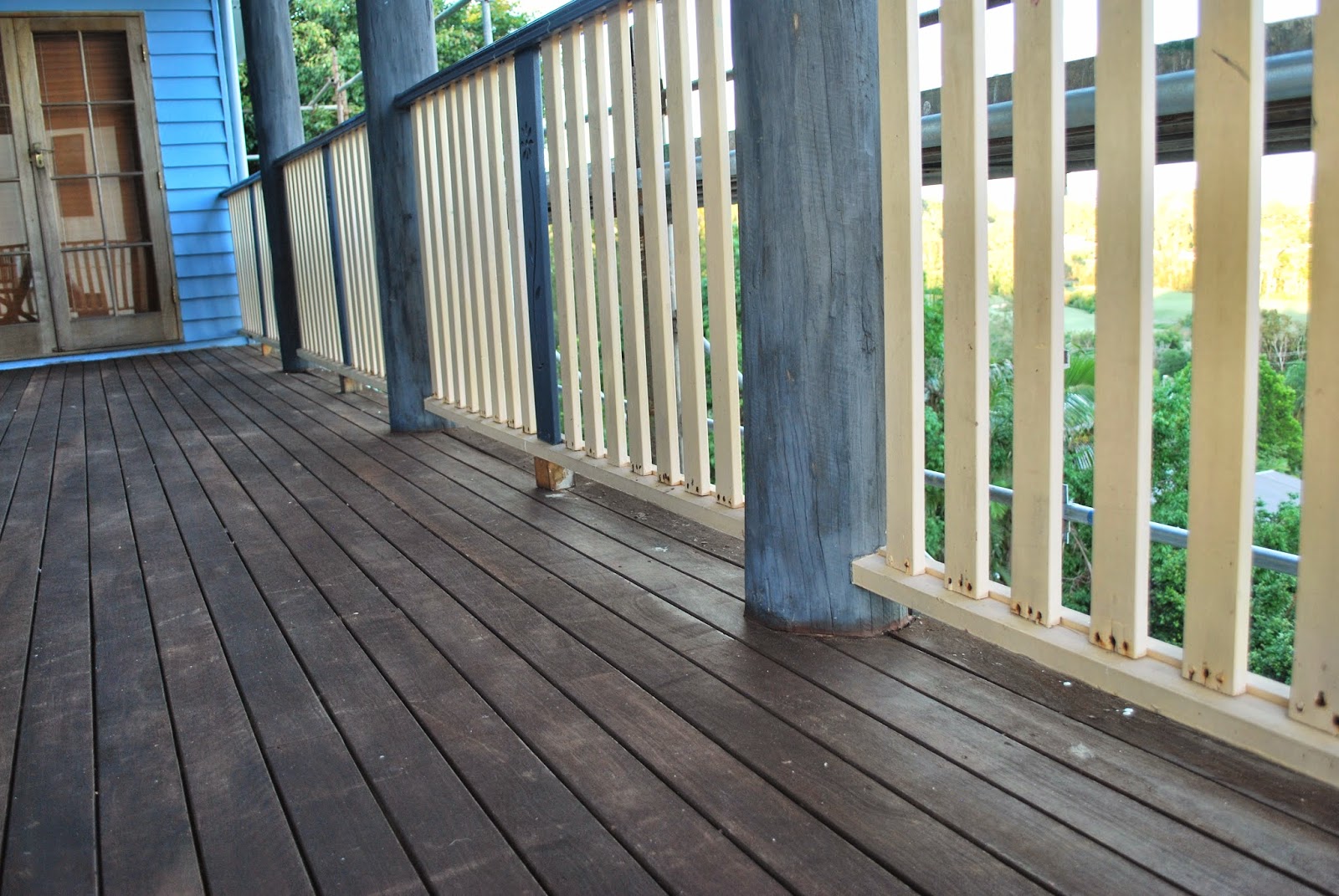 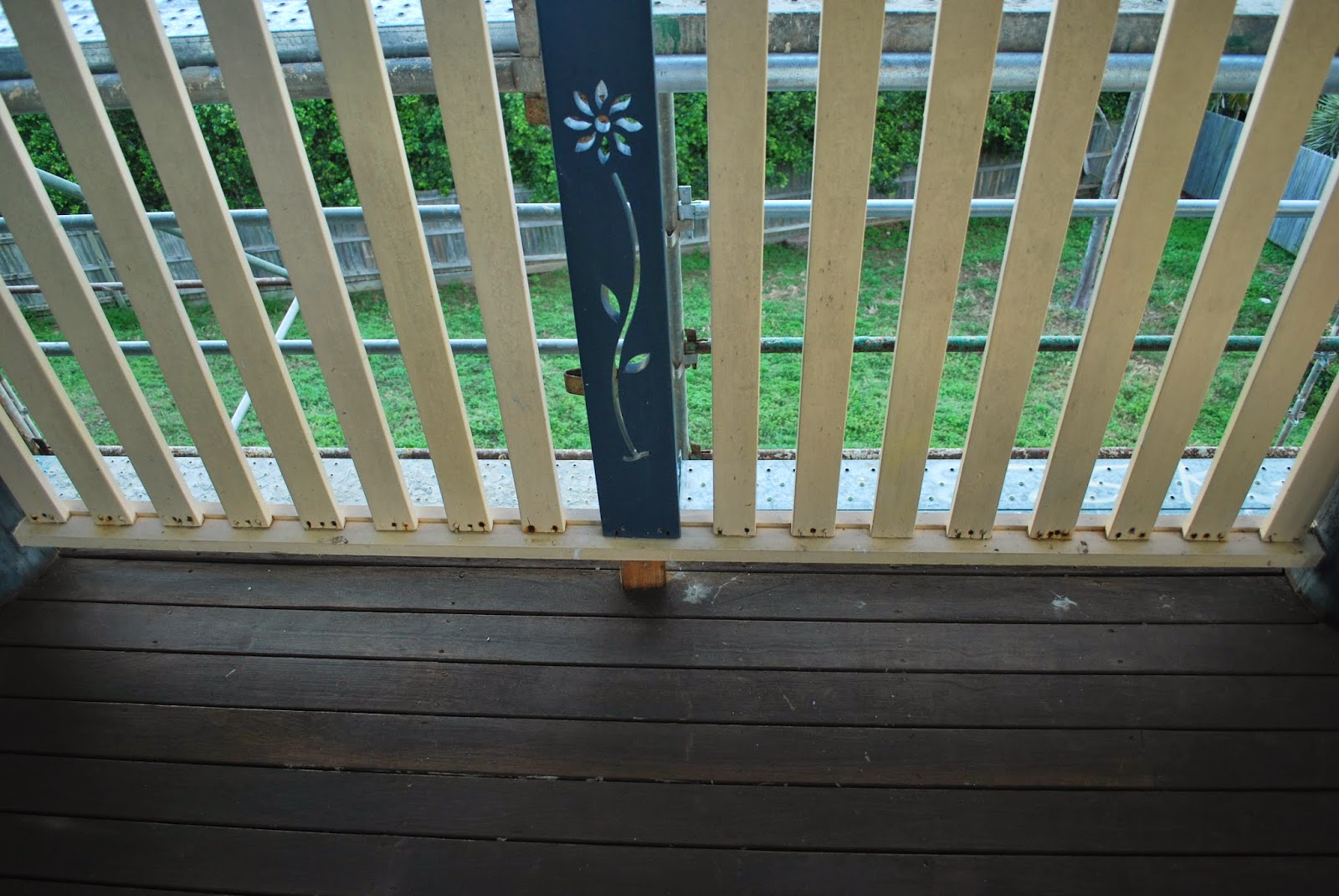 Late last week we realised if we were going to do them, we needed to paint them now while the scaffolding was up. First we gave them a hit with a hammer to see if any of the boards were loose, and screwed any in that needed it, and replaced a few that were a bit too rotten.

While I was at work L scraped out the old rust stained putty, and re puttied the holes. 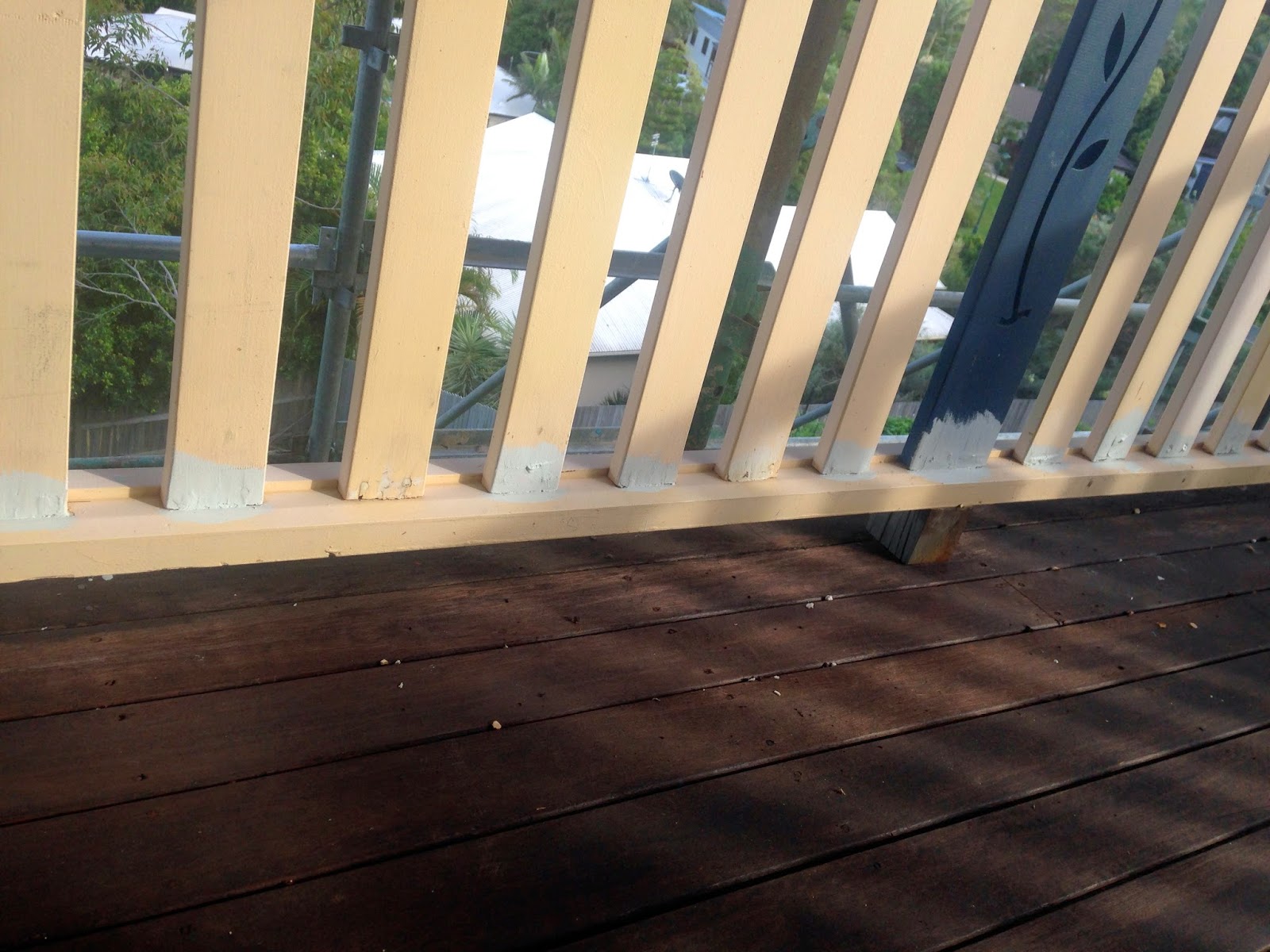 The next day he  sanded, and put a little paint over the new putty so he could wash the railings down.

Then we painted. We kind of worked together to minimise drips. He did the back and one side, I did the front and the other side. 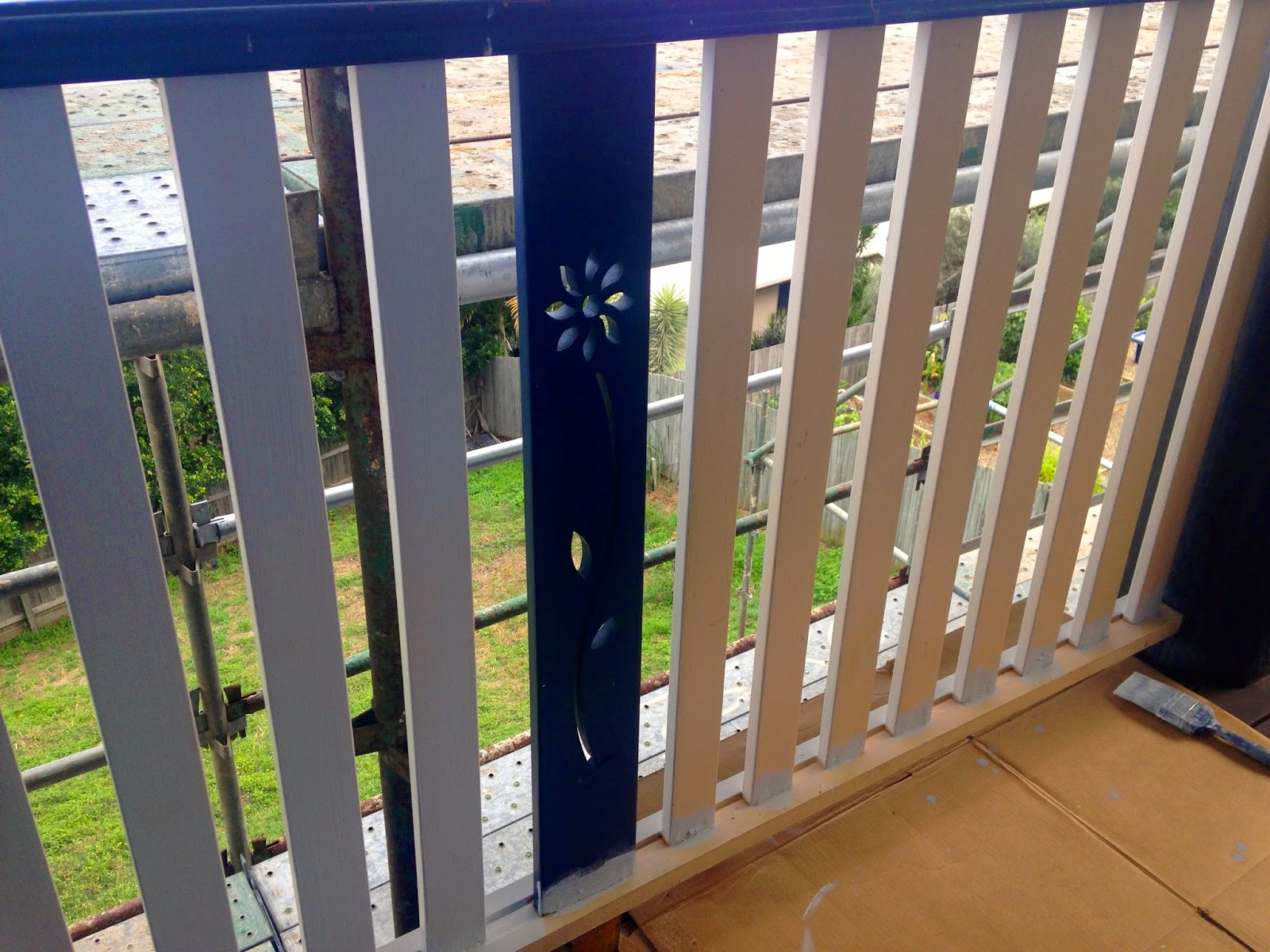 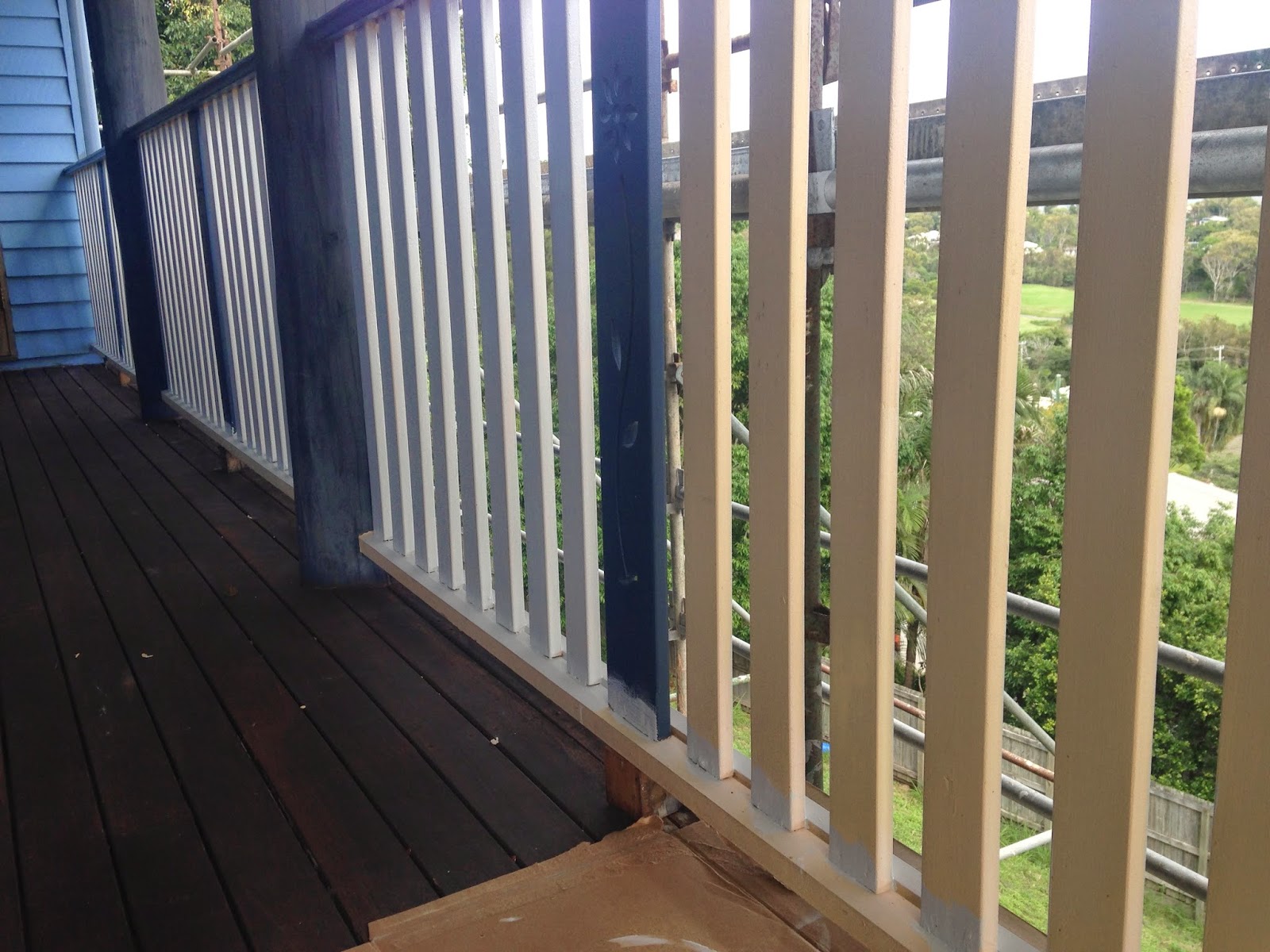 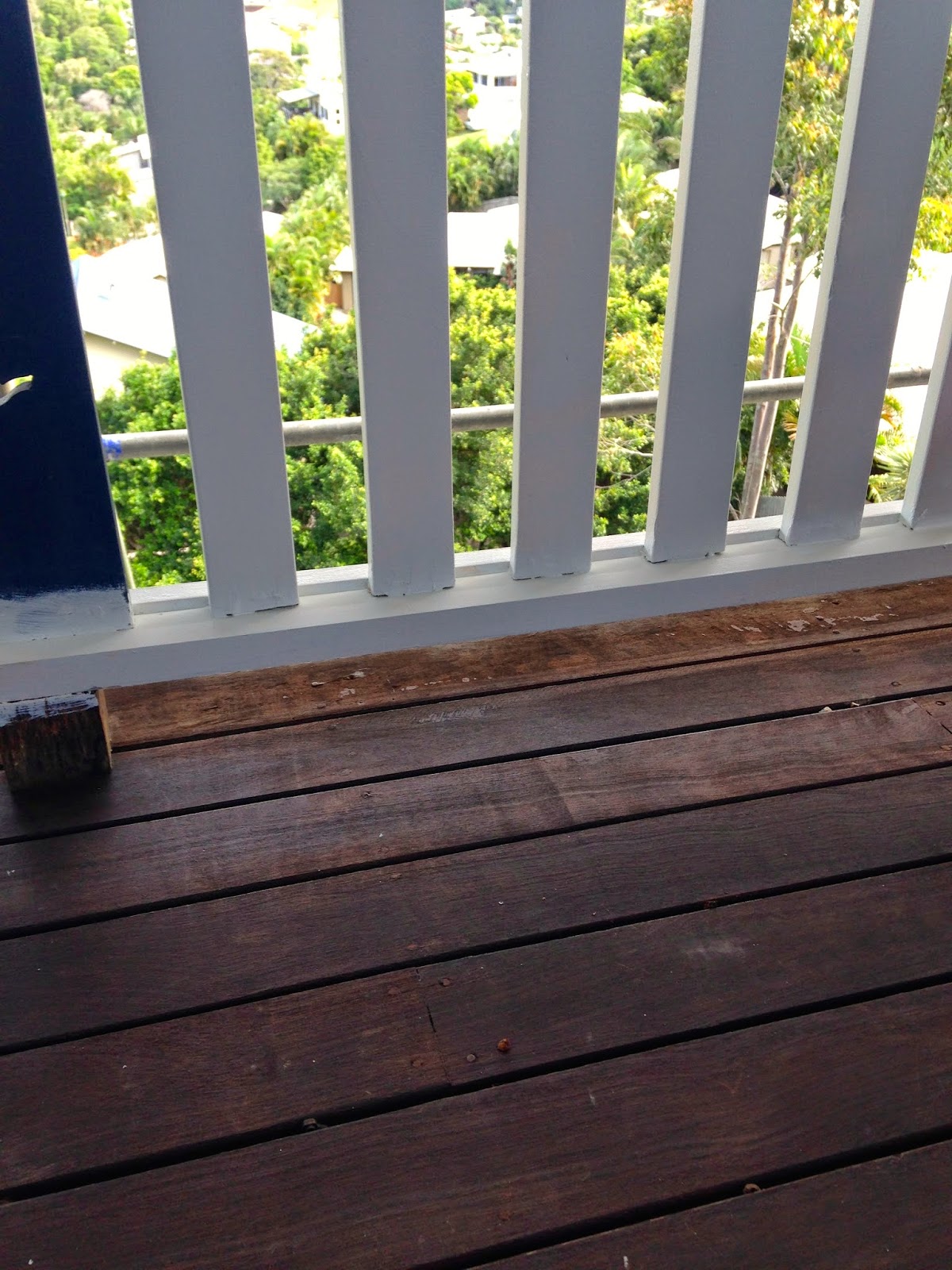 After the first coat had dried L used gap filler to try to minimise more water getting in and tidy up the edges. 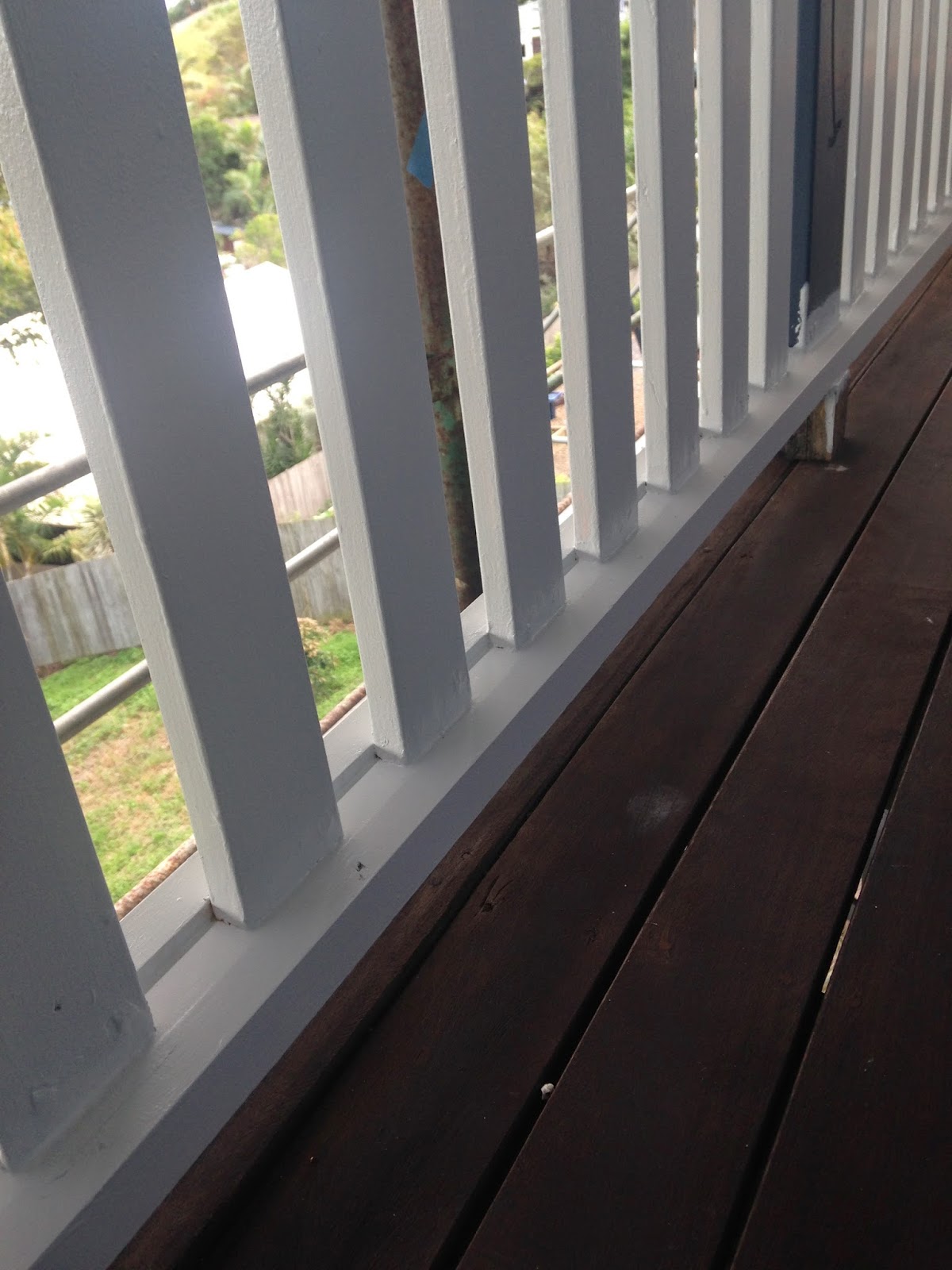 Eventually we will need to replace these railings due to the water damage, but they should last a few years. We will just keep a close eye on them, and also hope the rust doesn't seep through and stain the putty again! 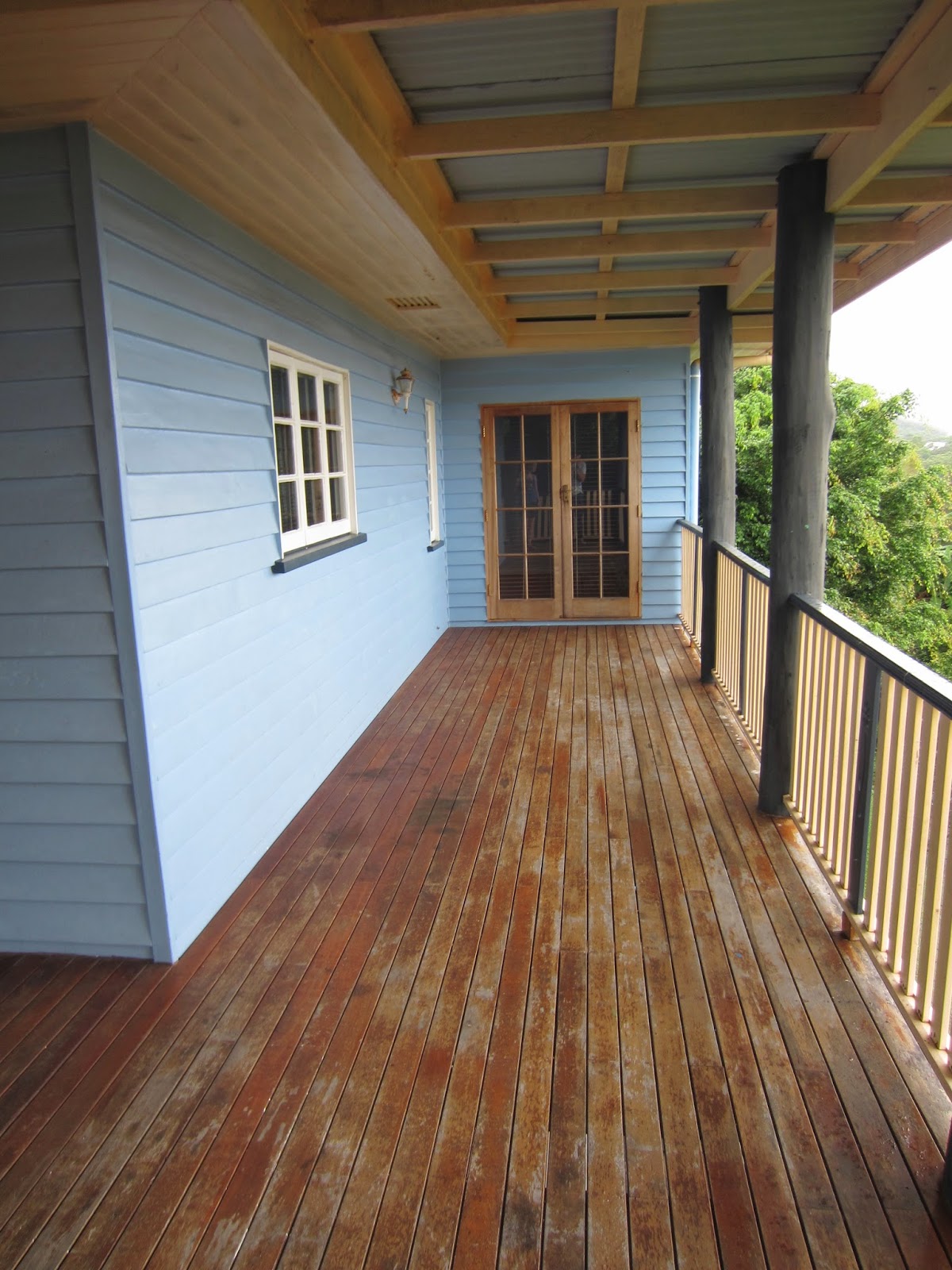 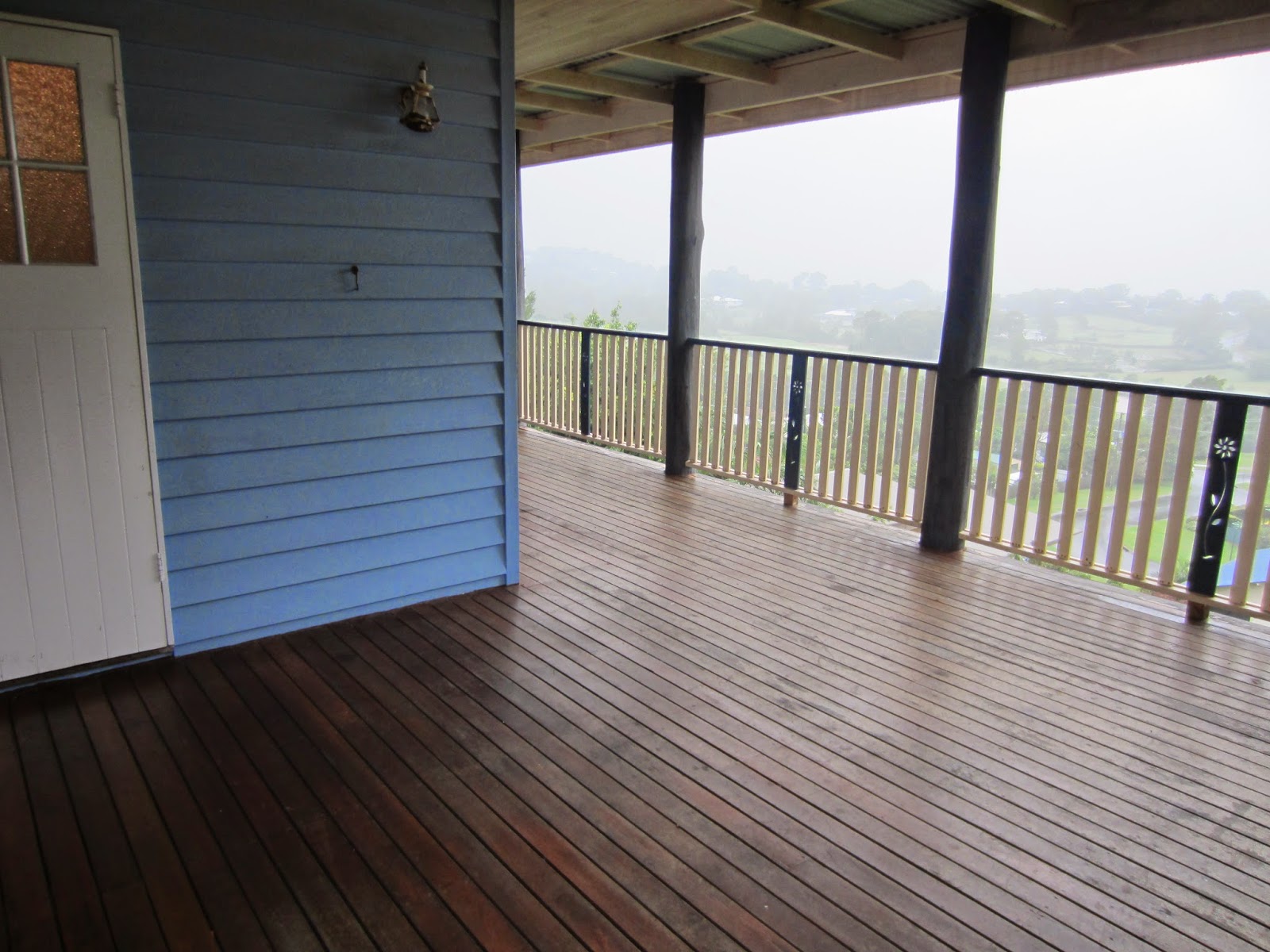 I won't put an after-our verandah looks like a bit of a bomb site, it's dirty and messy, we still have a hole in the eaves and we haven't painted the walls yet.

*If you are building railings, paint EVERYTHING before you make it. Including the ends. If you make the railing, and then paint it water gets into the gaps and into the bare wood, causing the wood to rot and the screws to rust. 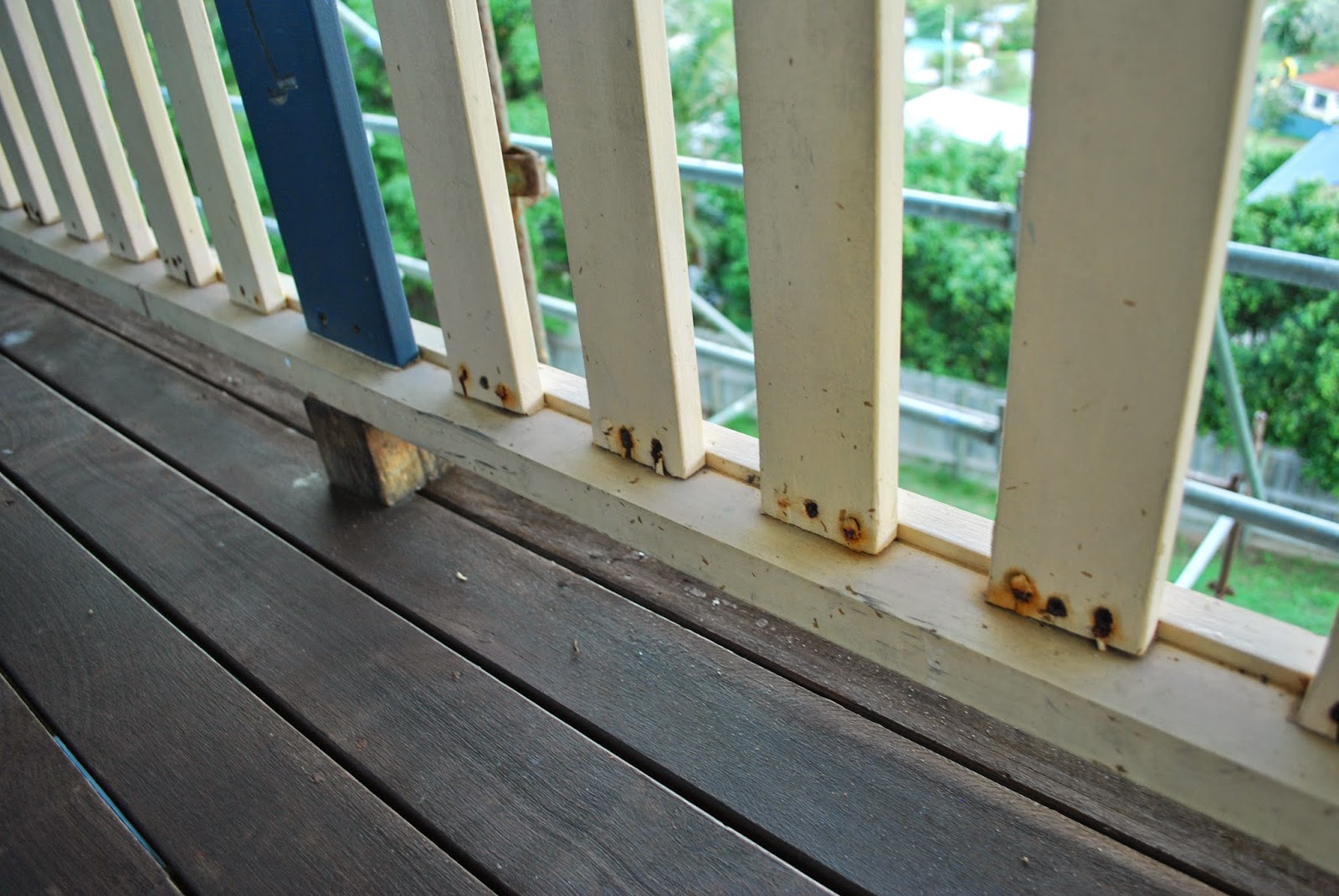 Tell me what you think-I love to hear from you!

Ness
Hi! I'm Ness! I'm a newlywed, and we are (slowly!) renovating, decorating and DIYing our Queenslander by the beach, and living life in our blue house.